Presented by Israeli President Shimon Peres, the one million dollar B.R.A.I.N. Prize was awarded to The BrainGate team led by Dr. John Donoghue (Brown University) and Dr. Arto Nurmikko, in recognition of their outstanding work in brain-computer interfaces. The winner was announced at the 1st International BrainTech Israel 2013 Conference in Tel Aviv today. 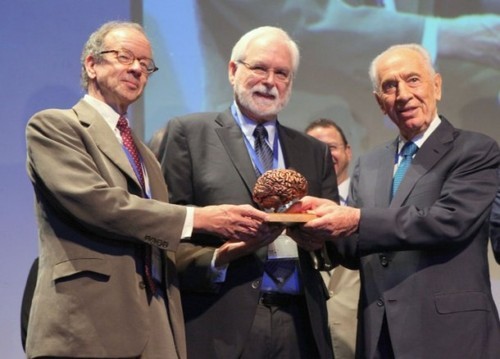 As we reported earlier the B.R.A.I.N (Breakthrough Research And Innovation in Neurotechnology) Prize is an international award granted for a recent breakthrough in the field of brain technology for the betterment of humanity. The award was granted by Israel Brain Technologies (IBT), a non-profit organization inspired by President Peres vision of turning Israel into a global hub of brain technology innovation.