It is important to realize that the fashion in any technology business is necessary for an acceleration potential, e.g. more money for R&D. Still fashionability has nothing to do with the technology itself. You can have least developed, expensive, compexity-redundant but for some reason well-known (marketed) solution. 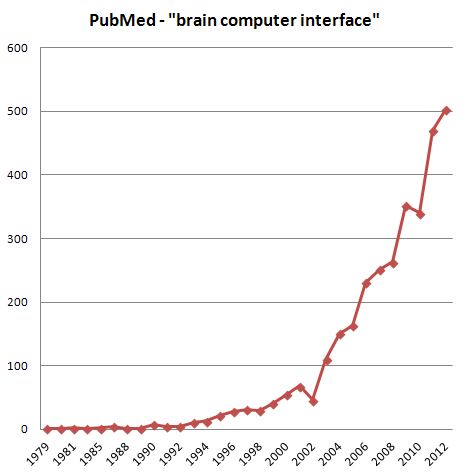 From the technological perspective we did a big moves in the field of Brain-Computer Interfaces. I propose here to look carefully at the graph (above) and a chronology of main results in the domain(below) to analyze correlation of article number and results.

As you can probably see, there is no correlation. The last 15 years are the years of steady incremental innovation. BCI is becoming more popular, But… Bit these indirect data give us a sign that the field is still in the phase of early development. Present limitations are due to lack of knowledge of the neuronal signalling mechanisms that lay beneath electrical activation or technical methods of signal processing.